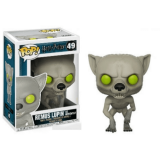 This Remus Lupkin As Werewolf Funko POP! is part of the  Funko POP! Harry Potter collection.

Released in 2017 this Funko POP! is a former Hot Topic Exclusive.

A Harry Potter Funko POP! which is based on Professor Remus Lupin.

A half-blood wizard (half pure blood and half Muggle) cursed with lycanthropy during his childhood.

Fenrir Greyback was known as ‘the most savage werewolf alive’ and bit Remus when he was four years old.

Severus Snape created the Wolfsbane potion to subdue Remus’ condition when they were both younger.

Remus Lupin made his first appearance in JK Rowling’s Harry Potter and the Prisoner of Azkaban.

Albus Dumbledore hired Remus to be the new Defence Against the Dark Arts teacher at Hogwarts school.

Married to Nymphadora Tonks a Metamorphmagus and they had a son together called Teddy Lupin.